We will keep you updated on the latest developments with our summer hockey instructional school, as well as any updates related to date shifts or changes due to Covid-19 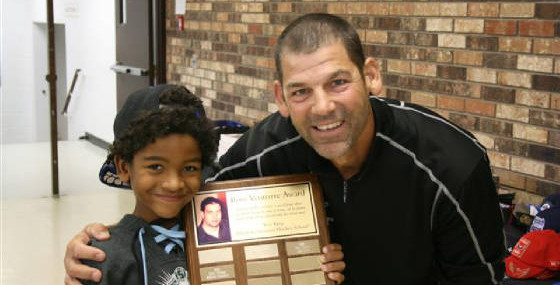 GRAVENHURST – It is the end of an era in Gravenhurst sports, but there is a new chapter that is yet to be written.

After 29 years of teaching young boys and girls the finer points of hockey, Kris King has sold the hockey school that bears his name to two friends, Mike Fountain and Derek Schofield. The transaction was finalized during the first week of the 2015 Kris King Hockey School session.

“It’s kind of bittersweet in a sense,” King said. “We spent that many years being part of this town in the summer programming, to have it increase to something very successful. But there comes a time where you have to make a change.”

King said there were many factors that helped him make the decision to sell the school, one being the responsibilities that come with his fulltime job as senior vice-president of hockey operations for NHL’s central office in Toronto.  He will be busy next summer assisting the league with the World Cup of Hockey, slated for the fall of 2016.

He decided to talk to Fountain, a former NHL player who has been an instructor at the camp for 27 years.

“I think the goal along the way was for them to get to that 30th season,” Fountain said. “But circumstances change and they approached me about a month ago on a very basic level about taking over this school. About three weeks ago, the talks started getting serious. It was a no-brainer for me. I consider the Kings family and I love the town.”

Fountain, who manages a recreation facility in Grand Rapids, Mich., and oversees the minor hockey program there, said that the new school will be called the Mike Fountain Muskoka Summer Hockey School.

He added the school’s program will change slightly; it will run the first two weeks of August instead of the last week of July – first week of August as it did with the King school.

“We will be doing some different things on the ice, some of the classic as well, and some of the off-ice stuff will be tweaked as well. Having said that, you have to make it fun, where the kids are enjoying themselves and making friends. We will not lose that,” Fountain said.

Schofield, who is a teacher at Gravenhurst Public School, is a partner with Fountain in the new school. He will be the administrator of the program while Fountain lives and works in Michigan during the rest of the year.

“I will be sending out all the emails, maintaining the website, overseeing the registrations, and doing such,” he said.

King said the town has been important to his career.

“I have seen fathers who have kids here who I taught as well. You sit there and realize that 29 years is a heck of along time, with 6,000 students. This community has been very good to me. If anyone asks, this (town) has been a big part of my success getting to the pros and as playing as long as I did.”

But this doesn’t mean that King many not make an appearance at the new school next summer.

“If I am going by the first two weeks of August, you might see me sticking my head in here … someone has to teach these kids to hook and slash and trip,” he said while wearing a big grin.

Mike and I are saddened to announce the cancellation of our 2021 camp.  After many discussions with the Town of Gravenhurst, there are simply too many unknowns regarding the availability of summer ice, what health guidelines could be in place, and whether folks from outside our geographic health unit would even be able to participate.  In the end, we are disappointed, but are hopeful to be returning to normal in 2022!

If you left a deposit with us last year, please know you have two options.  We can apply this credit to our 2022 camp, or a full refund can be issued.